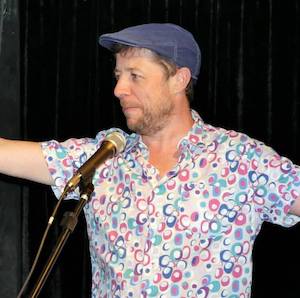 Ferdian Events is the brainchild of Event Manager Stephen Garland who caught the bug for working on events first on his hometown festival the Granard Harp festival. It is actually  the oldest harp festival in Ireland, first held in Granard in 1781 and after a lapse of 200 years it was reorganised in 1981 and enjoyed a decade as one of the most important small festivals in Ireland incorporating live Street entertainment and the Harp instrument competitions, which still survive to this day.
Stephen was part of those organising committees as a teenager through the 80’s and formed the basis of an event management career which led to Ireland's possibly most unorthodox 3rd level institution, Ballyfermot Rock school in music and media management. Subsequently he became something a serial entrepreneur who has lived, worked, loved, eaten, partied, pioneered and innovated in 6 different European countries, Brazil and now back ‘Home in Europe' settled again between Ireland and Barcelona.

Me and the Dr. F
In 2015 I was diagnosed with the jackpot of Multiple Sclerosis – the ‘No Treatment No Cure’ version that is Primary Progressive and personal health took centre stage. Didn’t much like the prognosis and found my way to a little known (at the time!), non FDA approved treatment in Moscow and on December 5th 2017 underwent a Stem Cell transplant that I am so happy to say has 'Stopped my Unstoppable disease' and kept me from the wheelchair that was my only prognosis. Thank you Dr. Fedorenko and all the incredible team at the Pirogov University Hospital, I owe you getting my life back!!! From Irish market stalls to language schools in Finland to publicly funded multi-disciplinary Arts festivals in Barcelona to the biggest supplier of live English comedy for public and corporate entertainment in Spain the experience has being diverse.
It has meant developing an expansive network of contacts that includes not just A-List international musicians, comedians, dancers and promoters across the world but also the best of amateur entertainers and companies. I have been President of Sports clubs, organised large sports events, fell in love with a Brazilian Event manager and we both worked on the mega Events that were the 2014 FIFA World Cup and the 2016 Rio Olympics.
I have a 20+ year history of attendance as an accredited promoter at the Edinburgh Fringe and have produced 3 shows in the World’s biggest Arts Festival.

Ferdian Events was established in Ireland out of Longford in 2018 with the idea to pull together the experience of this 35 year career into a small independent Event Mgmt company that could offer my skills back to the Irish Event industry.
When the Pandemic arrived in March 2020... we took the opportunity to get busy up-skilling and completed a Postrgraduate Certificate in Creativity, Innovation and Entrepreneurship at the UCD Innovation Academy which led to my latest ideation...​

The Irish Canna Clinic I have been a 'Cannabis Enjoyer’ since my teens seamlessly transitioning to ‘Medical Cannabis’ user since 2014. As we are at the cusp finally of regulation of Cannabis across the world this is another area I have been heavily involved with Spain's Cannabis Social Clubs and I hope to bring this expertise to bear in Irish activism.
So look out for trips to the big Spanish industry fairs like Spannabis but also on the Irish Activism front what better than to create a truly meaningful event!!
The Irish Canna Fringe is still in the very early moments of production but in  2022 you can expect to see a 3 week multidisciplinary Arts that will run from April 8th to May 1st.​
Here’s an audiovisual taste from over the years online of some of those Ferdian Events we can draw on